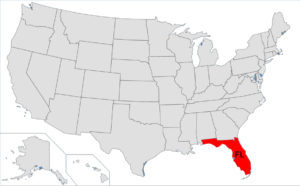 Which are the destinations Germans prefer most in the USA? The names are always the same: New York, California, Las Vegas – and Florida. The “Sunshine State“, as Florida is officially called, attracts tourists especially in the winter months. Day temperatures will be above 20 degrees celcius then. Orlando, Miami, Fort Lauderdale and Tampa are major international airports; together with Fort Myers and West Palm Beach, this is more than any other state can offer.

If you love the loneliness of the Rocky Mountains or the vastness of California (certainly except Greater Los Angeles), Florida is definitely the wrong destination. Florida is really crowded – 21 million inhabitants welcomed 126 million tourists in 2018, and the numbers are rising. First of all, it’s the sun that attracts so many visitors, accompanied by the mega amusement parks Walt Disney World (with over 50 million visitors annually) and Seaworld in Orlando or the Busch Gardens in Tampa. You will miss the amusement parks on our round trip – too loud, too expensive, too crowded. And to be honest, we already get sick on a simple merry-go-round.

However, we invite you to a great Florida tour starting at Miami International Airport. After one night in Homestead we head down to Key West, the southernmost point of the US American mainland. The town is shrill, colorful and most attractive – three hours driving on the Overseas Highway are really worth it.

Next day’s top highlight is the Everglades National Park. In the southern part of the park, we meet our first alligator before it’s getting really exciting in the Shark Valley on the Tamiami Highway. With rental bikes we ride on a trail of approximately 24 kilometers which allows us to take pictures of the alligators from short distance. Sometimes the animals even lie in the middle of the path – scary, but great.

Via Ochopee (with the smallest post office in the USA) and Everglades City we drive to Naples, the city of the rich and super rich. We follow the west coast to Bonita Beach and to Fort Myers, where we can recommend a tour of the Edison and Ford Winter Estates. Next destination is Cà d’Zan in Sarasota, a Mediterranean estate of the circus tycoon John Ringling.

Take your time to visit Tampa (Tampa Bay Hotel, Ybor City) and St. Petersburg (Dali Museum) before heading further north to Tarpon Springs, the Greek town of the sponge divers. Then we leave the metropolitan area of southern Florida, and via the two State Parks Homosassa Springs Wildlife and Wakulla Springs, both worth seeing, we reach the white state capitol in Tallahasse, the capital of Florida.

Now we change the coastline and turn east. We skip Jacksonville, a mainly industrial city, and instead visit the university of Gainesville, home of the Florida Gators. At the east coast we spend an afternoon in St. Augustine, then we turn south again, passing the famous beach resorts of Daytona Beach, Palm Beach, Boca Raton and Fort Lauderdale. We skip Orlando due to reasons already explained and head directly to the Kennedy Space Center in Cape Canaveral.

The last four nights we spend in Miami Beach. In the morning Miami Beach is a nice and friendly city, seeming quite normal. However, during party time which starts at noon and ends well after midnight it becomes loud and shrill. Even if you are not a partygoer, you should experience the city once in a lifetime. Trips to downtown Miami and its different districts (Bayfront, Design District, Little Havana, Coconut Grove) complete our journey to sunny Florida.