Québec – Around the Gaspé Peninsula

Our journey through the province of Québec (which is the French part of Canada) begins at the international airport of Montréal. A first detour leads us to Mont-Tremblant, the most famous ski resort in eastern Canada. The Village, a colorful little settlement free of cars and looking like Disneyland, even has a small cable car to overcome the height difference in town.

We continue through the Laurentian mountains to Shawinigan, the central town in the Mauricie region. Next destination is Trois-Rivières, the oldest industrial city in Canada and hub of the Canadian paper industry. Besides the approximately 760 m2 of frescoes showing the city’s history, a visit to Boréalis, a modern museum about the history of the paper industry in the city, can be recommended. The first highlight of this trip is Québec City, the capital of the province. We reserve a whole day for visiting the old town around the impressive Fairmont Le Château Frontenac.

We follow the St. Lawrence River on the northern shore, passing the Parc de la Chute-Montmorency and the huge pilgrimage church of Sainte-Anne-de-Beaupré. We add detours to the bird paradise of Cap Tourmente and the small artists’ village Baie-Saint-Paul, cross the Saguenay Fjord and finally reach Tadoussac, the center of whale watching. In Les Escoumins we take a car ferry to Trois-Pistoles on the other side. After a stopover in Rimouski, the only larger city on this side of the river, we arrive at Mont-Joli, gateway to the Gaspésie.

The route around the Gaspé Peninsula, in total about 900 kilometers long, follows the southern shore of the St. Lawrence River. As the distance between the opposite shores is almost 100 kilometers the locals refer to the river as “the sea”. The Centre d’Art by the artist Marcel Gagnon in Sainte-Flavie is a great sight; his wooden figures stick out of the water at low tide. What follows after Matane, a local supply center, is a series of nice lighthouses: La Martre, Cap Madeleine, Pointe à la Renommée and finally Cap-des-Rosiers in the middle of Parc National Forillon, a further highlight of this trip. 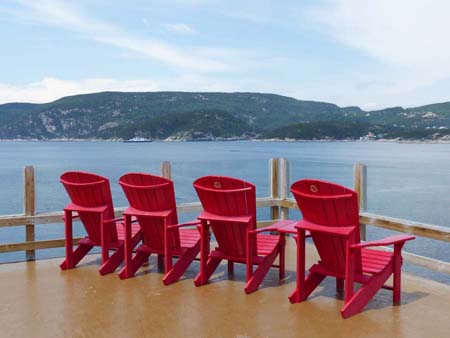 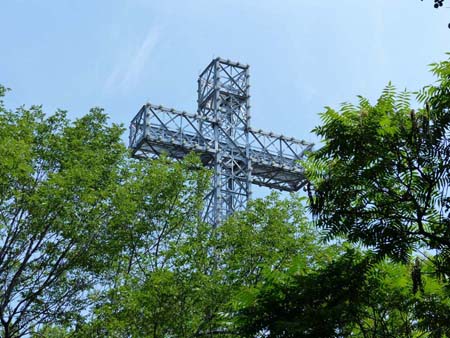 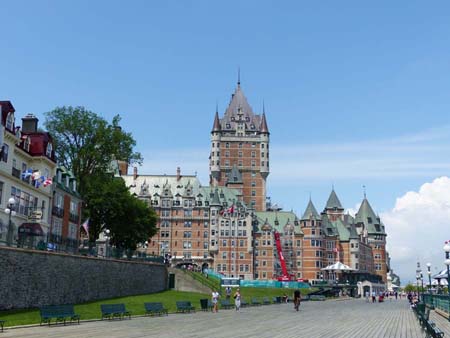 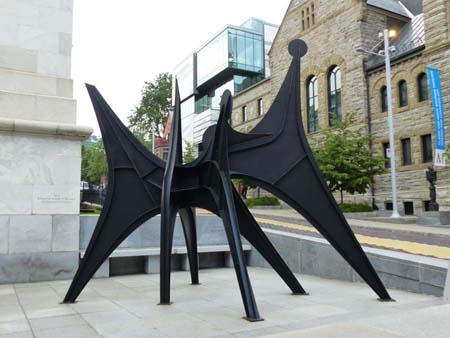 The cities now following are the main tourist attractions of the region. Gaspé, which gave its name to the peninsula, owns the only wooden cathedral in North America and – most important – the “Birthplace of Canada”. In a beautifully designed park, a stone cross and a few historic houses remind us of the French explorer Jacques Cartier, but also of former native Mi’kmaqs.

Only an hour’s drive later, Percé turns out to be the first real touristic destination on this journey. This is mainly due to the huge Percé Rock and of course due to Île-Bonaventure, where about 60.000 gannets are breeding next to many other bird species. The rock can be passed by boat; the island, declared as a national park, offers three nice hiking trails.

The following places are called L’Anse-à-Beaufils (with a small historic merchant’s shop), Chandler, Bonaventure (with a red and white lighthouse) and New Richmond, a “Gallic village” where people speak English – which is completely untypical for the region. Crossing the Van Horne Bridge in Pointe-à-la-Croix leads to Campbellton already located in the province of New Brunswick.

We now turn inland to Matapédia where we have a great view of the confluence of Matapédia and Restigouche River from the modern Deux-Rivières lookout. Via Routhierville with its red, covered wooden bridge and the small town of Amqui we finally get back to the St. Lawrence River in Mont-Joli.

Once again we pass Québec City on Autoroute 20 and finally reach Montréal, the second largest city of Canada. We recommend to climb Mont Royal and enjoy the fantastic view of the city. Follow the traces of the late singer Leonard Cohen, who lived in Montréal for a long time. Or simply stroll through the streets of this interesting city, where we finish our round trip to Québec and the Gaspésie.