Ontario – Land of the Great Lakes

Ontario is Canada’s most important province. Almost 40 percent of the population lives in Ontario, the capital of Canada is located here, and the Golden Horseshoe is the most industrialized region in the country. So, there are many reasons to take a closer look at this exciting province.

Our journey starts in Ottawa, the capital of the country. Parliament Hill, the historic locks on the Rideau Canal and the National Gallery are all located in downtown Ottawa and can be easily explored by walking. Plan two days for this really interesting city.

Now we are ready for our round trip. We follow the Rideau River to Smith Falls and finally reach Kingston at the St. Lawrence River with the impressive Fort Henry. The city is the ideal starting point for a trip to 1000 Islands National Park. The International Bridge right in the middle of this world of small islands and the 1000 Islands Skydeck, a 120 meters high observation tower, are popular destinations. Over the 1000 Islands Parkway with the cities of Rockport and Gananoque we return to Kingston.

We follow Lake Ontario to the small town of Cobourg – a pearl on the lake. Our insider tip: have a coffee and a piece of cake (the best in the region) at “66 King West”. Next destination is the Peterborough Lift Locks, with almost 20 meters the highest hydraulic boat lift in the world. The McMichael Canadian Art Collection in Kleinburg is worth a detour; then it’s time for the megacity of Toronto.

We leave the busy metropolis on a six-lane highway (per direction!) into the crowded Golden Horseshoe. Burlington and Hamilton each have a beautiful park. Hamilton is also home of the first Tim Hortons – today the coffee house chain has almost 5,000 stores. It is not before St. Catharines on the Welland Canal that the roads are getting more quietly. We visit the Konzelmann Estate Winery, founded by a German couple in 1988, stroll through beautiful Niagara-on-the-Lake and follow the Niagara Parkway, once described by Winston Churchill as the most beautiful road in the world. Our destination is the twin-town Niagara Falls with the top highlight of every trip to Ontario: the world-famous Niagara Falls. 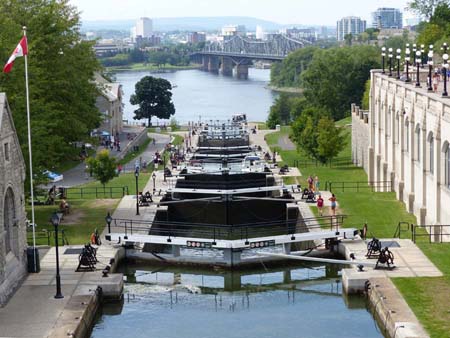 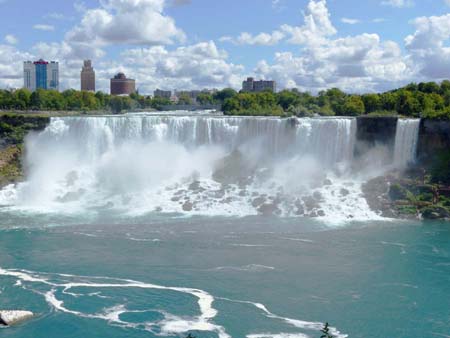 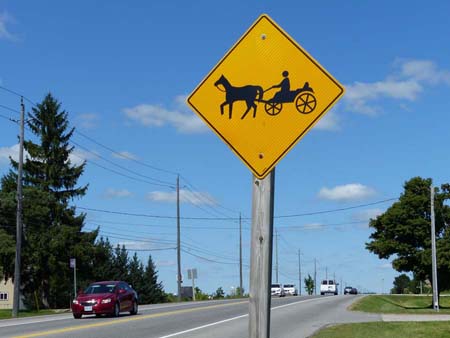 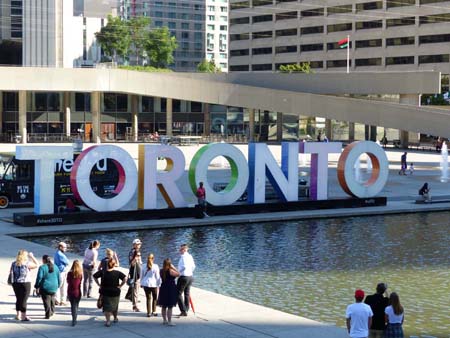 From now on we follow quiet country roads. We drive to Fort Erie on the lake of the same name, take a look at the International Peace Bridge and at Buffalo vis-à-vis in the USA, and then follow the shore of the lake. In Port Colbourne we visit Lock 8 on the Welland Canal, Dunnville proudly shows Muddy the Mudcat, a fish sculpture, and Port Dover has a small lighthouse with a sandy beach.

We turn north to Brantford which boasts two memorials for Alexander Graham Bell, the inventor of the telephone. Kitchener once used to be called Berlin and has the second largest Oktoberfest in the world; St. Jacobs and Elmira are two cities characterized by the life of the Mennonites. It’s funny to see horse-drawn carriages on busy streets, with people wearing 19th century clothes. West Montrose offers Ontario’s only covered wooden bridge. Before we spend the night in Owen Sound, we visit the monument of “Beautiful Joe”, a faithful dog, in Meaford.

Next morning we take the ferry to Manitoulin Island. The island is a hiker’s paradise, and Ten Mile Point Outlook offers a great view. Further north in Sudbury, the largest city in northern Ontario, “Inco Superstack” is the highest chimney in the western world, and 9-meter “Big Nickel” is towering high above the mining and industrial city. In the days to follow we enjoy a lot of nature. Killarney Provincial Park is considered to be Ontario’s jewel among the parks, here you can easily stay for several days. Killbear Provincial Park also has many beautiful trails.

In Parry Sound we could turn west, but we want to collect some sights further south. The open-air museum Sainte-Marie among the Hurons near Midland tells the story of a Jesuit mission. Nearby Wasaga Beach is the longest freshwater beach in the world.

A special attraction is The Webers, located directly on Highway 11, which sells several thousand freshly prepared burgers every day – don’t miss this unusual place. Bass Lake Provincial Park near Orillia is perfect for another hike. In Gravenhurst you can find “The World’s Largest Muskoka Chair”, and in Bracebridge a pencil about 10 meters high.

One last highlight is Algonquin Provincial Park. It is the largest park in Ontario and a attracts visitors from all over the world. All major trails and the Lumberjack Museum are located on Highway 60, which runs along the southern edge of the park. Via Gatineau in Québec, separated from the capital only by the Ottawa River, we finally reach Ottawa again.